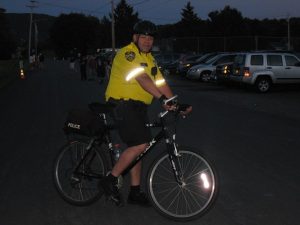 The Town of Chester Police Department has used bicycles for patrol since 1995. The Town of Chester Police bike patrol was developed as another part of the department’s proactive approach to law enforcement and community commitment. The unit aids positive community relations as well as providing a sensible approach to policing the neighborhoods, bike paths and school zones. Today, the bike officers are a common and welcome sight, providing community contact as well as general and special patrol services. The community views bike officers as being more approachable.

The first bicycle, a GT mountain bike, was purchased with the assistance of the Sugar Loaf Chamber of Commerce to be used for patrol during the semi-annual craft festivals in the hamlet of Sugar Loaf. That bicycle was retired from duty in 2000, when the Volunteers of America donated two Trek Police mountain bikes to the department. The VOA managed a New York City homeless shelter in Chester that bordered the popular Heritage Trail and were responding to requests from the community for increased patrols on the trail. The shelter closed in 2007 and was purchased by the county. The Heritage Trail is a county-owned nature/exercise trail that follows the path an old railroad bed and currently spans the area from Goshen to Monroe.

The department currently has seven certified bike patrol officers – Sgt. Vitale, who supervises the unit, Sgt. D’Agnese, Officer Perez, Officer Weinstein, Officer Dugan and Officer DeLuca, along with Chief Doellinger, who rides occasionally. Assignments to patrol on the bicycles are made on an as-needed basis. Because of the layout of the town, the bike patrol is usually used as a secondary form of patrol. Many of the main roads in the town are not “bicycle-friendly” due to narrow shoulders. As a result, the bikes are generally transported on the back of a patrol vehicle and then unloaded and used to patrol in specific areas. The members of this unit can respond to a variety of situations that may arise in the areas they are patrolling.

The bike patrol has been a very successful addition to the “team effort” of the department. Bikes give the officers the advantage of speed and stealth, increasing chances of catching criminals. A bike officer can conduct surveillance, or ride up to an incident without being detected. As a result, the bikes can be used to target specific problem areas. Utilizing specially outfitted mountain bikes and additional special equipment, these officers provide the public with a unique level of safety, security, and community policing that other conventional means of patrol cannot offer. Bike officers are also used to give bike safety presentations at special events upon request.

The primary advantages of a Bike Patrol Unit include:

In addition to regular police training, each officer of the Town of Chester Police Department is certified by the Law Enforcement Bicycle Association, Inc. (L.E.B.A.). This certification is accomplished by completing a forty hour Basic Police Mountain Bike School. This school covers a wide variety of subjects including nutrition, physical conditioning, exiting the mountain bike prior to a take down and executing a traffic stop with the bike.

The Town of Chester NY © 2022. All Rights Reserved